Can we talk? Getting back to conversation

Face-to-face communication is the most powerful business tool we will ever have. So why don’t we use it more often? Or more effectively? Or more consciously?

For over a decade, I’ve been encouraging people to get out from behind their tools and technologies and talk to each other. People nod vigorously. Then they send off an e-mail with a .ppt attached. Or they type something into Jira and feel the product user’s needs are well described. Maybe they post a Tweet, hoping the right people will read it. Have you ever said, “Yes, I talked to [Whomever],” then recall later that what you actually did was correspond in Slack? Tools can fool us into thinking we’re communicating.

Tools create contact. They can also share certain kinds of information. That is all. We mustn’t confuse that with connection, communication, conversation, dialogue or real interaction that leads to fresh ideas or new ways of working. Yet we do. We see a situation that will create a problem for our project and we send a memo. We need executive support for an initiative and we give them a PowerPoint. We would rather type than talk.

When we use text, whether it’s paper, email, text messages or something else, we may be transmitting information, but not necessarily communicating. Even when we actually are together, we can fail to communicate. Are your meetings a series of broadcast monologues? “I did this yesterday. I’m working on this today. Nothing’s blocking me.” Or do people actually talk about the work they are doing together?

The first value of the Agile Manifesto for software development emphasizes “individuals and interactions over processes and tools.” The meaning of the world “interaction” is a mutual or reciprocal action. In its scientific meaning, it’s a situation in which two or more objects or events act upon one another to produce a new effect. That’s the sort of thing that can happen in a good conversation.

But it’s easy to be distracted by our tools and processes. Maybe it’s because these are things we can measure. Are we having daily stand-up meetings? Tick the box. Retrospectives after every sprint? Tick again. All user stories in the system? Another tick. Tools and ceremonies are useful in creating good work, but they are not going to substitute for a conversation. At best, they can provide a reason to talk. We say, “A user story is an invitation to a conversation.” Do we truly understand what that means? 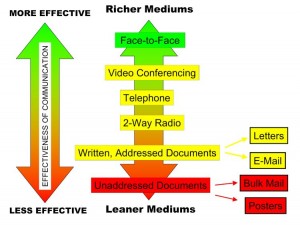 The Media Richness Theory, developed in corporate communications in the mid-1990s, ranks communication methods according to how well they reproduce the information sent through them. Face-to-face communication sits at the top. When we’re talking together, we have the benefit of emotional and social cues, through body language and tone. Importantly, we also have a very short feedback loop. We know, at once, if our message has been received. We also have the opportunity to ask for and provide clarification and confirm understanding.

More recently, Alistair Cockburn created a similar model, based on his own observations on projects. Modified, first by Scott Ambler, later by Chris Chan, it suggests that having a meaningful visual depiction of the information adds even more richness. 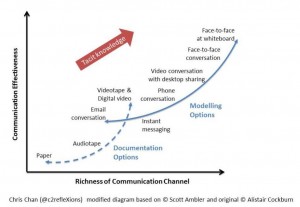 A conversation at a white board, for example, can provide even more meaningful conversation than conversation alone. We have all the richness of a face-to-face conversation with the additional ability to visualize and manipulate information as we discuss it.

Some of the most productive conversations are those that are well facilitated. A good facilitator creates a container for thinking together and makes it safe for people to express their ideas. Facilitation provides enough structure to engage people and enough freedom for them to be creative. It encourages full participation and ensures the outcome of the discussion is “owned” by the group and can be implemented. While it often falls to the agile coach or scrummaster, facilitation can be anyone’s job. Helping people talk together is a learnable skill that will increase in value as teamwork and cross-functional collaboration become the norm.

Can we recover the art of conversation? Generations of thinkers and writers have moaned that conversation is becoming a “lost art.” There’s new evidence that it’s true. The most recent call to action comes from Sherry Turkle in her 2015 book, Reclaiming Conversation: The Power of Talk in a Digital Age (Penguin Press, New York). A sociologist, psychologist and MIT professor, she’s been observing the impact of technology on society for over 30 years. She contends that our tools, particularly our “always on” mobile devices, are limiting our ability to hold meaningful, impactful conversations. (Here’s more about that.)

We can rediscover and recover this dying art by reminding ourselves of the importance, impact and value of real conversation as a workplace tool – and then doing something about it. We can recognize our tech tools and processes for what they are – processes and tools. We can use them for their intended purposes – but not indulge in the illusion that we are interacting when we use them. Step away from the screens, apps and devices. Step towards the white board with someone who matters.

Can we talk? You bet!