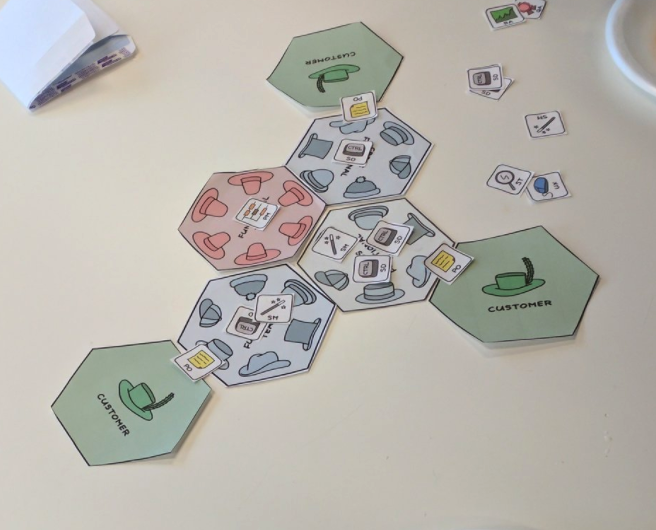 We’ve sifted through a decade of Version One’s State of Agile Development survey in order to create our Decade of Agile report (that you can get for free here), to see how Agile has evolved over the years.

It’s no surprise to those who follow the Agile Community that since the Agile Manifesto in 2001, many methods, tools, and approaches have been reinvented from old ideas. In the early days of Agile, the innovators and early adopters used the 4 values and 12 principles as they were intended:

Somewhere along the way, Agile became a business model because late majority folks needed more than 4 values and 12 principles. Sometimes the Agile community can be not as forgiving as perhaps we should be, so instead of helping organizations who see Agile as a process, we metaphorically beat them with the Agile stick.

Recently I gave a talk and workshop at Agile TO about what we can do when the word agile loses its effectiveness. First I asked the group if they think culture follows structure, or if everything starts from culture. Here are the results: 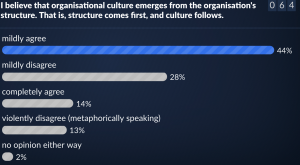 Some believe culture comes first, others believe structure comes first, and culture follows. We all bring our own baggage to the table when it comes to implementing Agile. Some will read ‘implementing agile’ and immediately respond with “WHAT??!?!? You CAN’T implement Agile!!!!”, and that’s fine, all of our brains are different.

I ran the Meddlers Game from Management 3.0 and gave the group scenarios to help them design their organization: 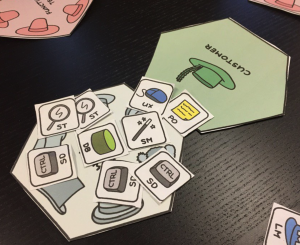 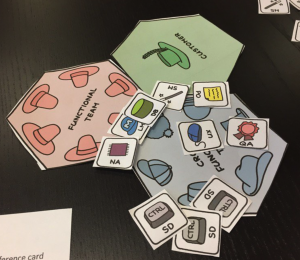 Oh, and this group didn’t have testers! They did have one QA person though!

After the first round, we started talking about the impact of the decisions to shape the organization based on general specialists or on specialization.  The point was that one organizational design wasn’t right, there were only consequences of those decisions. As an example, having more general specialists makes the organization more adaptable. It also shapes your hiring process. If you’re setting expectations that value and team output are more important than individual roles, responsibilities, and rewards, you find different types of employees.

If you start by over-specializing, you create the need for functional management. Many teams that had line managers said initially all the employees would report to one manager. But what happens when the organization grows? After the second round, our organizations started expanding: 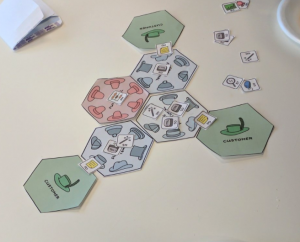 The professor of the organizational change course I took from MIT said “anyone can design and organization on the back of a napkin. It doesn’t take any special skill to do so” The hard part is all the ripple effects that you create when you meddle with the organization’s design. After we changed our organizations in round 2, the questions became:

The Meddlers Game helped us look at organizational change from one of three lenses. Even then, we only looked at two of the most simple attributes of one lens: How we group people, and how we connect these groups: 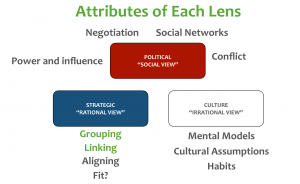 Join us for Management 3.0 in Toronto in November 2017 to learn how to apply these techniques.

We usually associate power with hierarchy and you’ve likely seen plenty of articles from Agile experts claiming that Agile didn’t work because top management didn’t support it. We know that’s not how organizations tick, but it sure it easy to blame the executives. Meaningful change happens when we understand the informal networks in the organization. It’s the 10-year employee who’s worked in 14 departments that has most of the power. He/She knows everyone and knows how the power flow works in the organization.

Through this lens, we need to consider:

Pages can be written about viewing change through the political lens, our conversations during the Meddlers circled around informal networks and the social aspect of change.

Like my professor said, anyone can doodle a new organizational design on a napkin, or whiteboard. Those that value rationality over emotion will say that if we picked the best design and everyone followed the process, we’d operate like a well-oiled machine. That’s why you see so many Enterprise COE’s or Enterprise PMO’s creating standardized processes. While it’s not the rule, it certainly is a pattern that people who value logic, rationality and process tend to find their way into project manager and manager roles. Their bias will lead them to follow a rational approach:

In our Meddlers game, we talked about what processes would need to change from round to round and how that might slow down work.

Ask 10 people what organizational culture is and you’ll get 10 different answers. If you’re a coach or consultant, how many times have you heard “shut up consultant, you don’t know how it works around here”. That’s culture. Generally speaking, when large organisations go agile, they create new agile processes but still force teams to do all the old stuff too. Habits are hard to break so when we look at agile change through the cultural lens we need to consider:

While those who believe a rational approach is best, those that believe culture is the centerpiece of agile change will disagree. It’s the clash between these people and groups that is the problem.

What was clear during this session was how different groups created different designs which set their organization down an irreversible path. Once we need to change our organizations, agile alone isn’t enough, and it has never been. Fads will come and go, but fundamentally, organizational change is more about considering change from these 3 lenses. The sweet spot it in the middle where these views intersect. If we tilt the scale in favour of one particular lens, we can expect the culture of our organizations to align with that lens.

A good example is a large organization I worked with that was extremely process heavy. When Agile was brought in, it was nothing more than a new set of documents and processes to follow. When those processes weren’t followed, departments that didn’t follow it were given a bad rating on their scorecard, to which the VP I was working with said “I don’t give two f**ks what that says…” when our division showed zero progress in the eyes of the Agile COE.

If you value the cultural or political lens, you’ll probably laugh and think that COE is filled with a bunch of idiots. Not the case. That’s the lens they chose to focus on and it was the right lens in that organization considering the centralized Agile COE was on the hook for making Agile work.

The point of the session was, there is a natural ebb and flow to how your organization works. You can use these 3 lenses to find an approach that makes the most sense to help you make progress, but also to challenge the status quo when too much focus is placed on one particular view.

If you’re interested in learning more about the Meddlers, join us for an upcoming Management 3.0 workshop in Toronto where we’ll look at how to energize your people, empower your teams, and organize your organization.