LEGO® SERIOUS PLAY® (LSP) helps people express their ideas through deep, meaningful conversations. In an LSP session, people work together to build models but how can they do that if one team member is 2200 kilometres away?

There’s only one way to find out!

The client’s head office is in Toronto and there was one person doing their remote jobs in Winnipeg. No pun intended! I shipped her a kit and she joined via iPad. She paired up with someone in the room during each debrief: 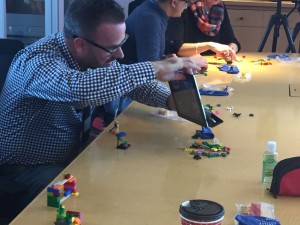 Of course, that’s pretty simple considering they were working on individual models. Now for the hard part, can they build a team model together? 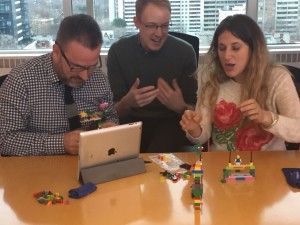 Yes! Yes they could! As they started building, the 3 people in the room were showing the bricks they were going to start with and the 4 of them verbally communicated how they would integrate the remote part of the model. 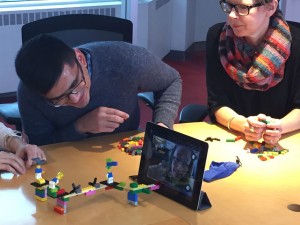 I suppose the name of the model would be “communication without borders“. It may be difficult to see from the photo, but they connected the model in the room to the screen that had the final section of the model that was sitting on her desk in Winnipeg!

I was speechless! One of the benefits of LEGO® SERIOUS PLAY® is the physcial connection and high-bandwidth communication, both verbal and non-verbal. This group needed to put more attention into how they’d work with the person who was remote.

During the debrief, it was easy for me to see how close this team was, that camaraderie manifested itself in their model.

Where there is a will, there is a way, and hopefully she remembers to ship me my kit back!

Learn what LSP Can Do For You