I’m conducting  a communication experiment. Lately I’ve encountered a frustrating pattern of people referring to “THEY” as an impediment to getting work done – efficiently, effectively or otherwise. This pattern has occurred everywhere I’ve ever worked but lately, as we try to reorganize our teams, it’s been more apparent than ever. I consider it as dysfunctional tribal passive aggression.

“We have met the enemy and he is us.” Pogo (Walt Kelly)

Because it’s hard to have a conversation with “THEY” to improve things I make a point to clarify who, exactly, we’re talking about (if not with). My interjection of “Who is THEY?” into conversations seems to be shocking to some. Inevitably it turns out that THEY is US. We’re all working to ship awesome, reliable, useful software to our clients – some of us just have different responsibilities in that value chain. 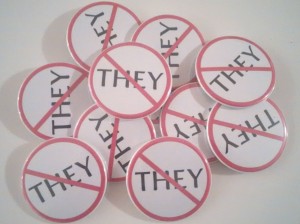 So I’m making the issue visible with…buttons! For less than $40(CDN) I had a stash of “No THEY” buttons made to hand to folks using “THEY” language I hand them out in one-on on conversations, at standups, in retrospectives and planning sessions. Directors and VPs are wearing them. People ask about them and the button starts a narrative about collective responsibility and conscious collaboration.

It’s not rocket surgery but it appears to be shifting peoples’ stances and prompting better conversations. Could something as simple help your situation?

If you’re interested in trying this I  recommend the awesome service of  People Power Press!